Shear pull tests were performed on simple bolted composite specimens, to be used as input for non-linear finite element modeling of typical skin to structure connections under crash or impact loads as part of an aircraft testing program. The aim of the project was to create finite element models and perform accurate simulations of the experiments.

In order to speed up the process of validating a large number of joints, differing in the type of bolt, lay-up, thickness and material, an ABAQUS plugin was created by ALE written in Python. The plugin generates a fully working ABAQUS model, based on dimensions and properties specified by the user via a simple Graphical User Interface. It makes clever use of the presence of repetitive parts and provides an extensive selection of premade bolts, modeled on the basis of technical drawings, to include in the model. The user is free to choose the dimensions of the specimen, type, size and number of bolts, material properties and speed of the pulling load. Simulations can be performed for both single lap shear and double lap shear joints.

All test configurations were replicated using the plugin and the automatically generated models were verified to contain no errors. A series of configurations was simulated to compare the accuracy of the models with the experimental data.

Besides the possibility to create and validate a large number of bolted configurations rapidly, the plugin makes it possible to design and verify new joints very easily. Moreover, bolts which are not yet included can be implemented in a convenient way. This makes the plugin a powerful tool in the design and testing phase of future aircraft. 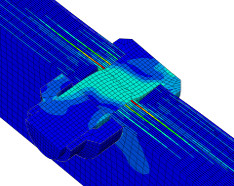